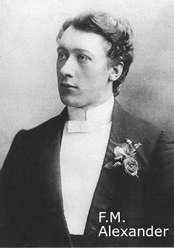 Many things were found since F.M. Alexander discovered the Technique. Some notable people started understanding the benefit of his work, and because of it, starting researching to better understand the process.

Even though Alexander didn't come from the scientific realm, his work was confirmed by many scientists and philosophers. Below are some of them:

Philosopher and educator, in his words: "It (The Alexander Technique) bears the same relation to education that education itself bears to all other human activities."

Physiology of posture. "Primary Control" His scientific theory confirms Alexander's work showing that posture is consequently influenced by the position of the head ("where the head leads the body follows").

Novelist. "He (Alexander) has certainly made a new and unrecognizable person of Aldous, not physically only but mentally and therefore morally. Or rather, he has brought out, actively, what we, Aldous's friends, know never came out either in the novels or with strangers."

Playwright. "Alexander has established not only the beginnings of a far-reaching science of the apparently involuntary movements which we call reflexes, but a technique of correction and self-control which forms a substantial addition to our very slender resources in personal education."

Anatomist and anthropologist. Dart, like Alexander, decided on the path of re-education, rather than learning something new, they were rediscovering something forgotten.

"Inhibition is a positive, not a negative force. Some degree of inhibition is essential not only for a good life but for any life at all... Inhibition is a physiological process which does not need to be conscious in order to operate. Bringing it up to the conscious level not only establishes an indirect control over anti-gravity responses, but facilitated the learning of new habits and the unlearning of those that are old and unwanted."

Nobel Prize in Physiology/Medicine. Mentor of Magnus mentions Alexander teaching approvingly in his book The Endevour of Jean Ferrel (1946).

Nobel Laureate Physiology/Medicine "Ethology And Stress Diseases." Devoted half of his Nobel lecture to discussing Alexander's research methods and the benefits he and his family experienced from studying the Alexander Technique.